January 04, 2018
EPCOT, as defined by Walt was to be an "ideal city." Nearly all his ideas came from a book he had read titled Garden Cities of Tomorrow by Ebeneezer Howard. If you interested in this historic read, its available for free on the internet archive.

While the book itself goes into great detail about economic models and structures, we are mostly concerned with its version of "ideal layout." To understand the thinking behind this, one needs to accept that this book was written in 1902, when industry and work was VASTLY different.

Howard was a big fan of Circles for Cities, and clusters there of. Often relaying on that as an efficient way to design a city, several people have aped the concept with out giving it much practical thought. This has actually be done in a few places, like the below odd golf and water front community near Port Charlotte, FL. 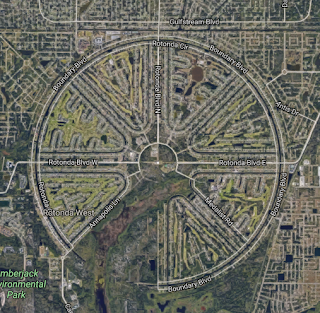 Its success is very dependent upon both geology (flat), and its added expense and difficulty of underground services (water mains, power, etc) would certainly add complexity to the build. You notice this appears unfinished, but it is. The large greenish brown area is wetlands that could not be developed. There are only a few places on Earth that are practical for a huge flat circle to appear completely to build this idea of a idea city. FL and some deserts out west springing readily to mind.

This real life example also lacks any real "city" (industrial element), instead mixing housing, golf courses and outdoor ares with a central socializing area for residents. It appears they were able to cram in seven golf courses and water front views for a huge amount of residents! This is notable, as remember, the goal is GARDEN Cities with efficiency.

This brings us to the plans laid for EPCOT, most famously behind Walt in his introduction video, and supplement plans discussed later when planning the project. We are left with a fairly detailed model of the EPCOT plan, but its difficult to study as its only briefly seen on the people mover as it passes space mountain in Tomorrowland. A few good pictures have been snapped, but most images leave more questions then answers since nothing is labeled.

These picture below best show what is intended by the model in Tomorrowland, a central area of business and industry, surrounded by comfortable living spaces. We are again faced with some difficulty of construction to meet design specs, as well as needing a geological area that is open to this sort of development.

EPCOTs chosen location was actually well positioned to meet these needs, but the geology was not, with Floridas high water table, many lakes and water ways breaking up the landscape.

The project was actually moved a bit as well, as the original location proved to house a bird that Florida insist on being protected. How that new idea of conservationist would have affected the plan is also anyone's guess.

In the end, for visual reference of the EPCOY Podcast, we are going with the picture here, with the added benefit of waterways in and around the city. Walt was fond of water features, and it would have made the city even more attractive. Since this city is multilevel, we also assume many of those waterways would have been aqueduct systems.

As the EPCOY podcast gets underway, feel free to imagine the city in the way you wish. These are just general guidelines, and ultimately, anything not build in real life can be built anyway you wish in your mind.