The Sound of Cloth

December 14, 2017
One of the hardest parts of choosing to tell a story via sound, rather than image, is the lack of visuals. The writer may have a vision in his head, but putting that vision into the head of the listener is sometimes impossible. Here is a great example: If I were to say "Sherlock Holmes" your image is likely something in a Deere stalker hat, cloak and a magnifying glass. Its a "classic image" of the detective despite the fact that he may have worn something like that once in a story. Instead, its likely the first image of him we come across, associating the word with a visual.

Naturally, in movies and TV shows, this is refereed to as "costuming". Since Disney employees are refereed to as "cast", it makes sense they would have costumes more than uniforms. The below example is two opening day Disney Costumes, and they are unapologetically 80's. This is exactly what I would want my "future park" to be filled with. It will be HIGHLY unlikely to get down to the uniforms in writing EPCOY, but if you need a visual, this is where you can start. 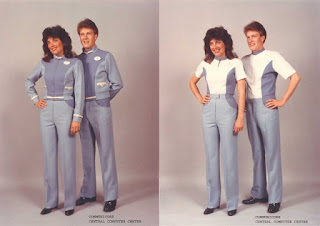 These fantastic uniforms are close in style to the ones that appeared on screen in the little known, and heavily under appreciated Earth Star Voyager, a Disney miniseries. Although the cut is different, and piping has been added, I would guess the same people were involved. Earth Star Voyager was filmed in Epoct for some scenes before moving to Canada, and the movie has always had a soft spot in my heart for that reason alone. In a future post, maybe I will do a review of Earth Star Voyager for kicks. Stay tuned. 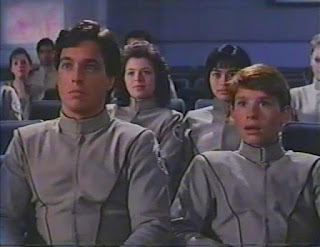