November 08, 2017
Crafting a world of dreams, which is in itself creativity, is always inspired by truth and history. This is so true of the EPCOY Podcast, wherein we create a world that has many of the features of our clever connected society, years before anyone thought of any of it. As a back drop of a larger story, inspiration in any form is very welcome. After all, we can't pull everything from our brains lest this would be not more than cheap science fiction.

Computers are a huge tool in our modern world. They are connective, organizing and time saving entertainment devices that have changed things more than we may be aware. Likely this change was unnoticed as it was gradual. Spend some time with a classic Apple IIe, and you will be swiftly reminded of both the limitations of 80's computers, and need for better understanding programming rather than just user interface setting selections.

This leads me to some images that really help us grasp the level of technology we desire to express in EPCOY. For example, enjoy this amazing home built Commadore C64 Laptop: 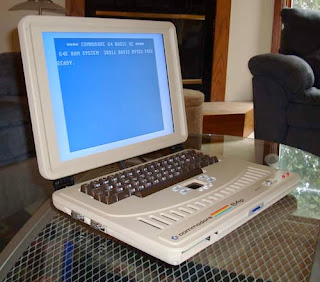 While we can quickly appreciate the form factor, having refined and defined what a laptop should look like via years of miniature modernization, this would have been a Apple level technology shift if released in the 80's. Its the great sort of Alt/Tech/History revision that really grasps what EPCOT was about. After all, Walt wanted to build a city that was just this, years ahead of the rest of the world, that was functional and efficient.

But there is a fun side of technology as well. The impractical is also entertaining and fun to imagine. While there was a Seiko version, followed a few years by a terrible Palm version, the smart watch wasn't even considered viable technology. Today "smart watches" are the closet we come, and those mostly need a modern smart phone connected to be at all useful. But, writing fiction, we should always ask, what if? 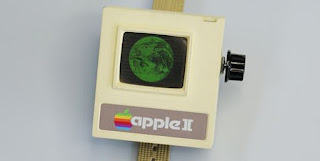 Enter the Apple IIe watch. Because Apple Watches are so in vogue! This master piece is able to be built at home (provided you have a 3D printer!) and its so impractical to be desirable. It would be even more desirable if actually ran basic, but I'm a computer nerd.

This is great inspiration for our Podcast however. Casting modern things into past existence is a great way to brew creativity, even if it is not so much improbable, as impossible. After all, the Apple 2 was released in 1977, 5 years before Epcot opened and the same year the Commodore 64 was released.

February 06, 2018
Sorry we have been a bit missing in action for this last week. If you are going through some commercials withdraw, worry not, more to be posted soon, and we really appreciate your listening.

We haven't wasted this week. Progressing our podcast to being the best podcast it can be, means taking time away to understand what listeners are looking for in a Podcast. Its fun to create satire commercials, and in many ways, very easy since "Marketing" is basically a inside joke. But we want to offer more than just two minute giggles every day.

As such, we have been LISTENING to a lot of other podcasts. In sales training, I frequently heard that there were "lots of books on sales" but "no books on listening." Why not apply the same thing to our endeavor?

So here are two shows that listeners of our Commercials Podcast will find delightful:

Phil is an Ex disc jockey and one of the most amazing actors Radio has ever seen. Phil is adept at doing an ent…
Post a Comment
Read more